Free Lucky Hat + Frosty Shades On Orders of $75 or More 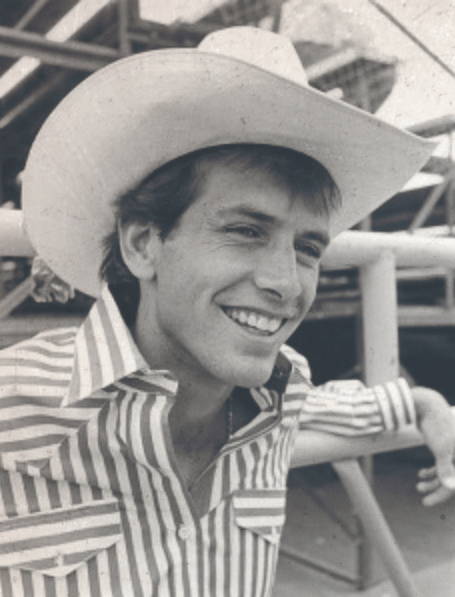 "His memory is alive today in all the young bull riders 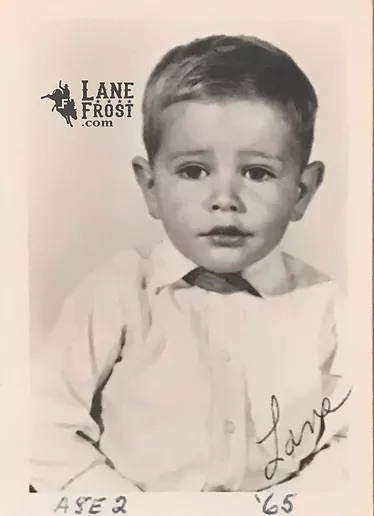 Lane was born on October 12, 1963. At that time, his parents lived in Lapoint, Utah. However, Lanes Father Clyde was rodeoing at the time and Lane's mother, Elsie went to stay with her parents in Kim, Co., while she waited for Lane to arrive.Lane was born in the hospital at La Junta, Co., the closest hospital to Kim. His full name is Lane Clyde Frost.Lane has an older sister, Robin, and a younger brother, Cody. When Lane was killed in Cheyenne he was 25, he was 5' 11"and weighed 145 lbs Lane, at the early age of 5 months, was interested in the bull riding events at the rodeos his parents attended.Mrs. Frost is fond of the memory of Lane awakening during the bull riding event, and he would cry when his parents stood up to leave early, If they returned to watch the bull riding he would quiet down.His mom made his first pair of chaps for him. She admits to hoping he "would out-grow this bull riding thing."Lane started riding little dairy calves on the family dairy farm in Randlett, UT when he was 5 or 6. He was 9 when he first got on a bull.However, to the relief of his family, he met Don Gay around that time, and Don told Lane that he should just ride calves and steers until his bones were more fully developed.Mrs. Frost says that they had been telling Lane the same thing, but of course he listened to Don! At the age of 15 Lane started to ride bulls on a regular basis. Before that, he had been competing on calves and steers.Lane's first rodeo awards were won in 1974, when he was 10, at the "Little Buckaroos" Rodeos held in and around the Uintah Basin of UT.Lane stayed on a bucking Shetland Pony to win first in bareback, took second in calf roping and rode a calf in the "bull riding" event to place third. 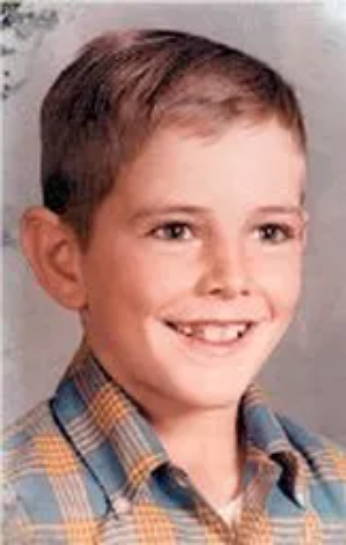 While rodeoing wasn't the way of life his parents exactly wanted for him, (especially the bulls!) they never discouraged him, and helped him whenever they could.Lane spent his first 14 years in Utah, doing chores on the dairy farm his parents owned, and later competing in various rodeo events. When Lane was in junior high school (7th & 8th grade), in Vernal, Utah he was very good in wrestling.He wrestled at about 75 pounds. During these two years he had 51 matches with 45 wins, 4 losses and 2 tied matches.Lane also continued competing in the "Little Britches Rodeos", and any other rodeo he could enter, until his parents moved the family to Lane, OK. in 1978 to escape the harsh Utah winters.Lane Liked the fact that there were more youth rodeos in Oklahoma then in Utah. Lane's mom says that, while they did not encourage Lane to ride bulls, they did support him in his decision.Lane began his freshman year at Atoka High School, his sister Robin began her senior year there, and Cody was in 4th grade at Lane Elementary. 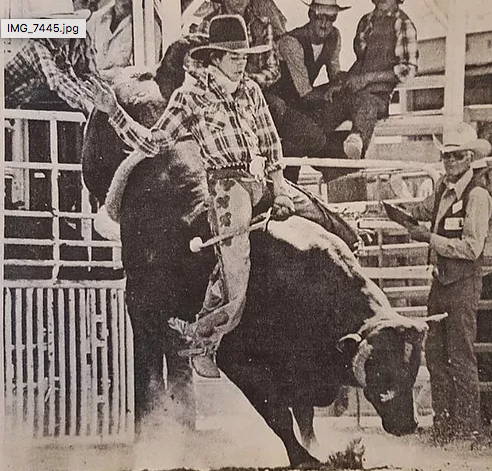 1988This was a busy year for Lane. In February, he competed with the U.S. Rodeo Team at the only exhibitionrodeo ever held at the Olympics. (Winter Olympics, Calgary, Alberta, Canada.) He won the bronze bull riding medal, and the U. S. Team won the gold.In early 1988 Lane accepted Jesus Christ as his personal savior.April, May, June and July of 1988 he participated in the "Challenge of the Champions" with the bull Red Rock.It was a seven event match-up between Lane, the 1987 World Champion Bull Rider and Red Rock, the 1987 World Champion Bucking Bull.Red Rock was retired after the 1987 Finals. He never had a rider stay on for the full eight seconds in 309 attempts in his professional rodeo career.In 1988 Lane and Tuff Hedeman were invited by Copenhagen/Skoal to try unridden bulls at the Hawaiian Professional Championship Rodeo held in Waimanalo, Hawaii on June 17, 18 and 19.Both Lane and Tuff rode their bulls.March 1988 found Lane winning the Dodge National Circuit Finals in Pocatello, Id.April, May, June and July of 1988 Lane was in the "Challenge of the Champions" with Red Rock. Lane still continued to compete in the regular rodeos, during the The Challenge of Champions.* Lane & Red Rock~Redding, CA.*At the 1988 National Rodeo Finals, Lane rode 7 out of 10 bulls and finished fifth in NFR earnings and sixth in the world standings.1988 - $ 74,700 - #61987 - $105,697 - #11986 - $104,128 - #31985 - $ 87,100 - #31984 - $ 50,688 - #9Lifetime PRCA Earnings: $489,7361989Lane felt that he lost his focus in 1988, and in the 1989 PRCA's handbook, next to his picture and statistics, he states:In early 1989, Lane was proud to help organize "Bullmania A Tribute to Freckles Brown", a bull riding event held in Guthrie, OK. in honor of his friend.The arena was sold out for the bull riding only event. It was around this time that Lane and Tuff and a few others started thinking about creating what would eventually become the "Professional Bull Riders"Clint Branger, a traveling partner of Lane's, won that inaugural "Bullmania". Clint still competes today.In the event, Lane wore the #2.No one could predict that, the very next year, 1990, #2 would be retired in Lane's memory, and hung on a chute gate.And the event would be renamed:"Bullmania, A Tribute to Freckles Brown and Lane Frost."However, because there was a problem with the name "Bullmania" (it might have been a copyright problem), in 1991 the event name was changed to:"Bullnanza, a Tribute to Freckles Brown and Lane Frost".In July of 1989, Lane and his wife Kellie were going to work as stunt doubles on the movie, "My Heroes Have Always Been Cowboys", about a bull rider that comes home to Oklahoma.Lane was also to have a small speaking role in the movie.But first Lane took some time to go to Cheyenne, Wyoming to compete in the"Cheyenne Frontier Days" Rodeo.Kellie stayed behind to start work on the movie.After Lane rode his second bull at Cheyenne Frontier Days, sportscaster George Michael, a frequent interviewer and friend of Lane, spoke with Lane, in what sadly would become Lane's last interview.George said to Lane, "But you just had to give the crowd a thrill with that dismount!"(Lane had somersaulted over the tail of the bull at the end of his ride.)And Lane replied, in words that would become truer than anyone could imagine in only four days, "Well, I don't always ride that good, but I can usually get off pretty exciting or do something afterwards."Four days later, on Sunday, July 30, 1989, Lane drew the bull named "Takin' Care of Business".After successfully completing his ride he dismounted.Lane was then hit by the bull, breaking his ribs and severing a main artery.He died within moments.Lane's last ride was on "Takin' Care of Business" Cheyenne Frontier Days July 30, 1989.

The same grey skies that were over Lane in Cheyenne seemed to have followed him south to Oklahoma. Only this time it was like the heavens wept along with the mourners, as rain poured down the day of his funeral.On August 2, 1989, Lane's funeral was held at the First Baptist Church in Atoka, OK., and then Lane was laid to rest at Mount Olivet Cemetery in Hugo, OK., near his good friend Freckles Brown.Oklahoma's paper, "The Oklahoman", estimated that 3500 people attended Lane's funeral on Wednesday, August 2, 1989, at the First Baptist Church in Atoka, OK.1200 filled the pews and aisles of the church and its adjacent auditorium, and the rest of the mourners stood outside in the rain, listening to the service over loudspeakers.The former state legislator and rodeo announcer Clem McSpadden, in his eulogy about Lane said, "He had one great quality that separates him from much of this generation today.He knew no greed. He also remarked on the vast age differences of the mourners at the service who were Lane's acquaintances. "Lane knew no age limits or boundaries when it came to making friends."Lane's friends, Tuff Hedeman, Jim Sharp, Cody Lambert, Clint Branger, Wes Ward, and Guy Sartin served as pallbearers.Lane was Laid to rest next to his friend and mentor, Freckles Brown. "When I have to think of Lane there, I like to think of Freckles there with him."Lane's funeral was held at First Baptist Church in Atoka, OK.Lane is buried in Mount Olivet Cemetery in Hugo, Oklahoma. His good friend and mentor Freckles Brown is buried in the next row, corner to corner with Lane.Because of Lanes salvation, he now has an eternal home in Heaven.